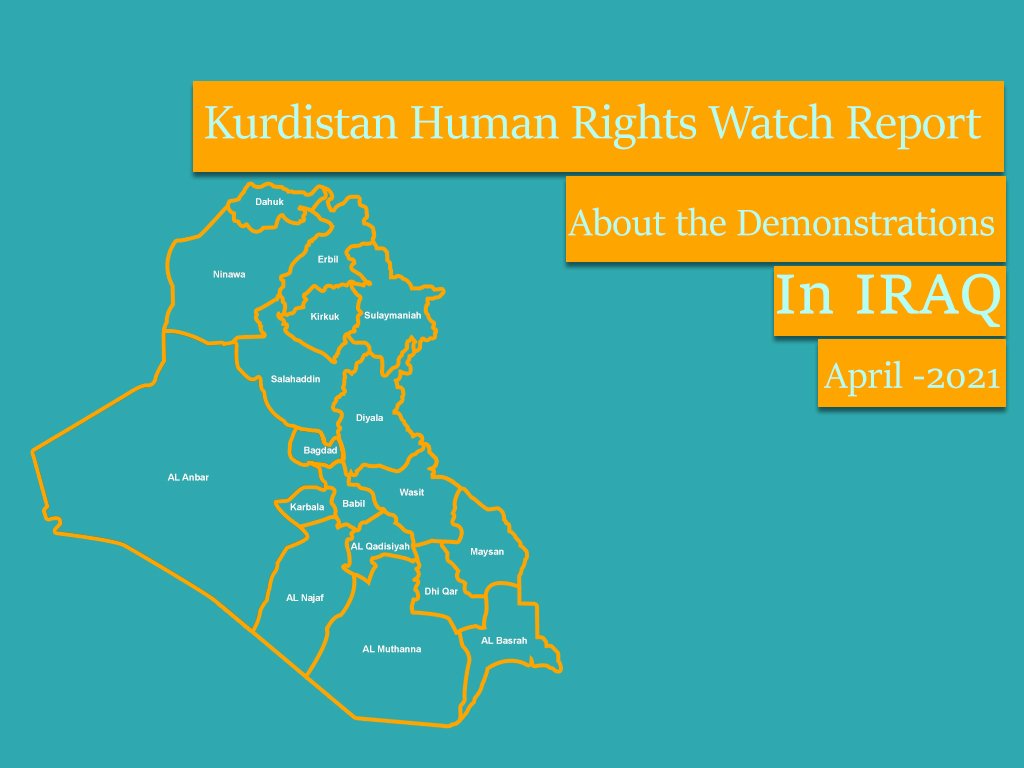 It is important to mentioned that Iraqi Constitution for (2005) has guaranteed the freedom of peaceful demonstration in a manner that did not disturb public order and morals, based on the provisions of article 38, stating that: “The government guarantees that public order and morals do not violate ‘the freedom of assembly and peaceful demonstration’ and is regulated by law”. These criteria are based on international standards stated in international conventions and certified by Iraqi government; that the legal protection of the right to peaceful assembly lies in article (21) of the Civil Rights Covenant and political (ICCPR).

The freedom to demonstrate is one of the highest forms of expression in line with international human rights standards, including: The Global Declaration of Human Rights 1948 IHRD and the International Covenant on Civil and Political Rights (ICCPR) 1966. This kind of freedom will be achieved usually by gathering groups of individuals in a particular place which might be unintentionally organized or agreed upon to demands their rights. In most of the cases, demonstrations are happened unintentionally, however, there are also political, economic, religious, or ideological motives for gathering. The idea of gathering is to be peaceful and the authorities have to deal with the protesters in a civilized and civil ways.

In conjunction with the approval of the general budget for 2021

In this regard, as an extension to the ongoing demonstrations in Iraq that have begun since October 2019. During April, 2021, the monitoring teams of Kurdistan Organization for Human Rights have witnessed a huge wave of peaceful and non-peaceful demonstrations. During last month, thirteen gatherings and demonstrations were observed in six Iraqi governorates, theses are: Baghdad, Basra, Najaf, Babil, Muthanna and Thi Qar, where varying numbers of protestors have demonstrated to protest against corruption, unemployment, poor public services, demand jobs opportunities and issues the payment of salaries and wages.

As a result, the demonstration and gathering are classified as following based on their motives:

There were eight peaceful gatherings in the governorates of Basra, Najaf, Thi Qar, Muthanna, and Baghdad. Thousands of civilians and recent graduates from Iraqi universities and institutions were demonstrating, demanding employment opportunities in the governmental sector and offer new job opportunities for people to live in Iraq.

Since early April, hundreds of alumni from different Iraqi southern and middle governorates have demonstrated, while hundreds were protesting in Allawi district within Baghdad on 18 April, 2021. While in Basra, specifically, in Hurya Square, the demonstrators have demanded suitable job opportunities that enable them for a decent life. Most of these demonstrations were peaceful, Al-Rasad Monitoring team in Baghdad mentioned “there was security forces to protect the protestors, to ensure the peaceful demonstration, keep the order of public system, and to ensure the traffic movement is not blocked. The security forces have ordered protestors to follow the proper instructions in regards to Covid-19 prevention measures, and ensure proper social distancing to preserve public health and safety”

Although these demonstrations were peaceful, however, a number of minor causalities were reported among the demonstration as a result of forcibly breaking up the assembly, that is in contrary to Internal Legislation and the International Standards for governing freedom of peaceful assembly. Among these laws, is the Iraqi Freedom of Assembly Law No. (19) of 2003, which was published in Al-Waqa’i Al-Iraqiya No. (3979), dated 10/7/2003. An example, what happened in the demonstration in Baghdad, Allawi district on 18 April, 2021. Whereas a group of graduates from medicine colleges have demonstrated to demand employment opportunities; unluckily, they were attacked and beat with batons and stick by the security forces, and emergency forces present in front of Ministry of Health in Baghdad to break up the assembly forcibly while the protestors where shouting with the word “peaceful”. It ended with a number of minor causalities among the protestors. Despite of what happened, the Ministry of Health hasn’t made any official statement yet to clarify the use of power by the security forces with the demonstrators.

These demonstrations have lasted for a week, until the government in some governorates have responded to the demonstrators’ demands. In this regard, we are referring to Prime Minister’s, Mustafa Al-Kadhimi, urgent response, whereas on 11 April, he has visited Basra while the demonstrations were ongoing, that is called “30,000 employment opportunities”. The visit lasted for fourteen hours and it covers ministerial project that have not been completed yet and so many debates were aroused around such as the mega project of Al-Faw port that was his first visit station, he also lunched other four projects. Al-Kadhimi has met the protestors and listened to their proposals as assured by the media reports, and he confirmed “the right for demonstrations and the government with all its security forces have to protect the demonstrations but this right should not cause damage or threaten public or damage private property" 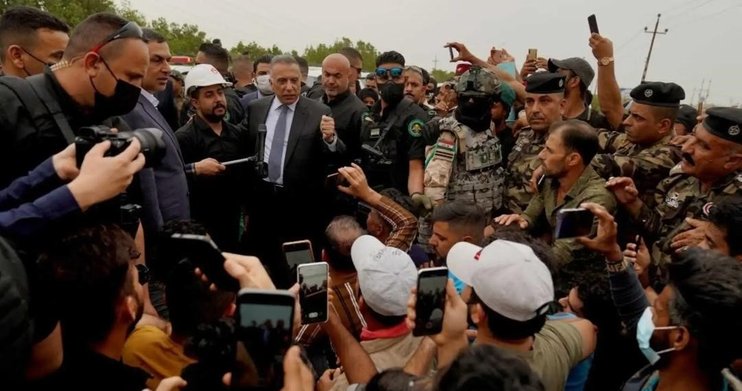 On Sunday, 18 April, 2021, the employees of Southern Electricity company have demonstrated to demand their rights to be included in the distribution of lands. On Tuesday, April 20, 2021, the monitoring team in Basra has also witnessed a march organized by a number of Naval Academy graduates to demand to be employed as Navay Officers in Basra Ports company. The demonstrators’ demands have not yet fulfilled despite all the governmental promises. Whereas no violations were reported by the security forces or the demonstrators.

Picture (3): a demonstration of dozens of Naval Academy graduates, demanding their right to be employed, and a scene from the march for employees of the Southern Oil Company demanding to be included land distribution. The pictures are taken by Basra Monitoring Team. 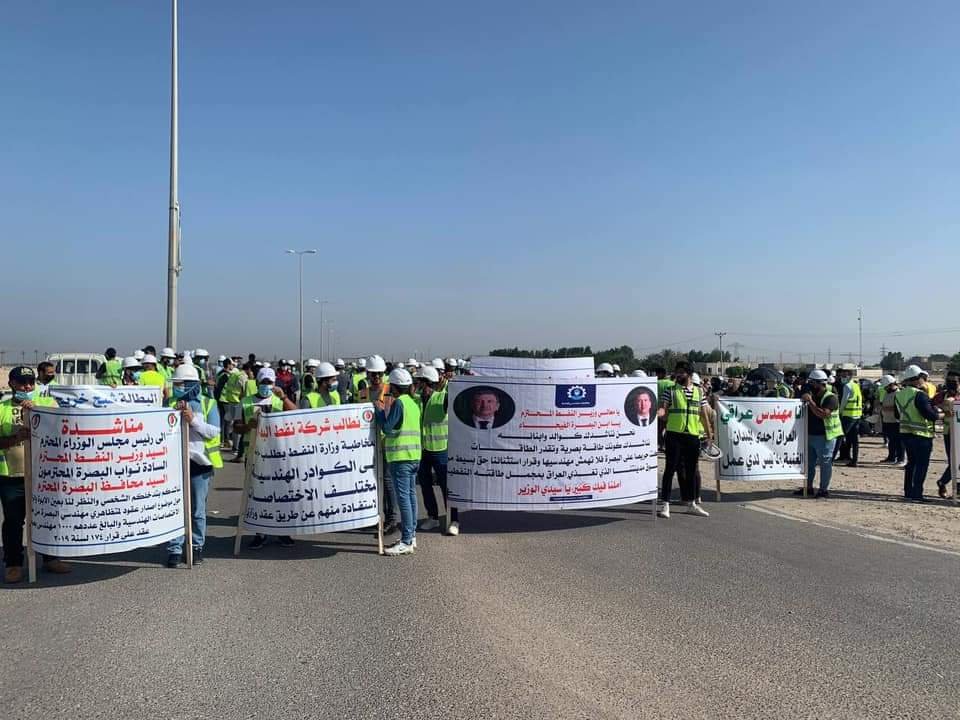 Picture (4): Hundreds of engineering college graduates in Basra demonstrated to demand the government to employ them. The picture is taken by Basra Monitoring Team. 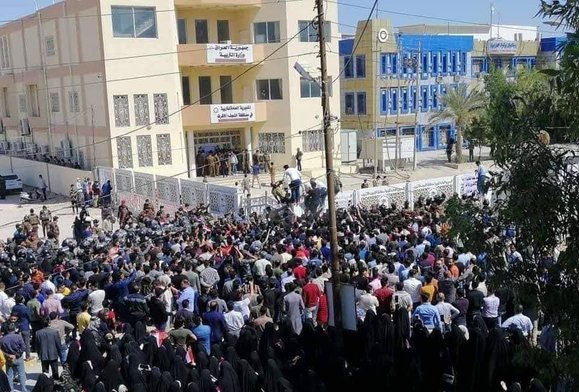 On 22 April, 2021, thousands of civilians from all society members in most of Iraqi cities have demonstrated, because of the deteriorating economic conditions and the poor public services such as providing safe drinking water and public electricity. In Najaf, a demonstration was lunched, whereas thousands of protestors have demanded the government to provide them with water and electricity that is cut off continuously for long hours in day and night with the increase of the whether temperature while people are fasting for long hours in Ramadhan which led people to suffer more, the demonstrators have raised banner having the text of “where is electricity? Where?”

On 11 April, 2021, dozens of employees (employed by a service contract in line with decision no 315, for 2019) in University of Kufa have demonstrated, whose their services have exceeded five years, they have demanded to have a permeant employment contract and take into consideration their years of services while they were on daily basis agreement as mentioned in the article of (61), paragraph (b), decision no. (23) for (2021) that is linked to Country Annual Budget for Iraq 2021, whereas the article (61), paragraph (b) mentioned:

The Council of Ministers shall have employment opportunities to implement the following paragraphs, provided that the concerned authorities to take the cost into their approved budget allocation in this law

(B) For the purpose of employing the daily contractors in all ministries and agencies not associated with ministries, whose service has exceeded five years or more.

The demonstrators have raised several banners demanding the government to respond quickly to them, the banners include the text of “today is a standoff, tomorrow shut down the offices” also “Minstar of Finance dismissal is our demand” 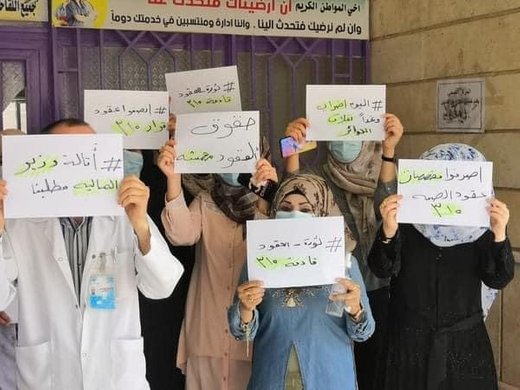 Picture (6): a demonstration for dozens of service contract in University of Kufa demanding a permanent employment contract. The picture is taken by Najaf monitoring team

In Nasiriyah, on 23 April, 2021, hundreds of young people demonstrated on Friday evening in the (Mahdia) district to protest against the deterioration of services in their areas, and they cut the iron bridge in the area without any intervention by the security forces.

On Saturday, April 24, 2021, a number of Administration and Economics graduates demonstrated in front of Thi Qar Governorate building to demand their employment into the governmental offices, and the government did not respond to the protesters' demands so far. On the next day, Dozens of young people who are on daily basis contract has demonstrated in Nasiriyah, demanding to be included in the decision no. (315) i.e., change their contract from daily workers to permanent employees in implementation of the aforementioned decision after the repeated promises of the government.

Picture (7): Hundreds of youths demonstrated in Nasiriyah - Hadidi Bridge to protest against the deterioration of basic services. The picture taken by Nasiriyah Monitoring Team.

The demands of the Iraqi demonstrations in the central and southern governorates were not limited to the lack of basic services only, but rather that part of these demonstrations was based on other aspects related to basic human rights, including the right to a fair jury. In Basra, on Wednesday, April 7, 2021, dozens of people protested against the decision issued against the demonstrator (B.A.) in which the judge sentence was a ten-year and two-month prison for burning Basra governorate building and the office of Parliamentary Office of Falah Hassan Al-Khazali, in a former demonstration occured in 2018. The security authorities claimed that the gathering is illegal as jury sentence is implemented based on a judicial decision, although the decision was previously announced on social networks. The protesters peacefully expressed their demands by raising the demands for the concerned authorities to reconsider the decision in a fair manner, but the demonstrators in Abdul Karim Qasim Square have been attacked by the security forces, beaten them with batons, arresting eight protesters, and then preventing the demonstrators from gathering again using excessive force and pursuing a number of protesters, which led to end the demonstrations forcibly and the square being permanently empty from protesters. After four hours, the detainees were released after taking their personal information, pictures, and pushing them to sign a hand writing pledge to not protest or demonstrate again. 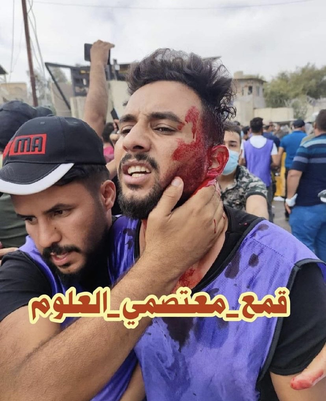 Picture (8) a wounded Iraqi protester after being beaten with batons and sticks in Baghdad. The picture is taken by Baghdad Monitoring Team

On the other hand, and as a result of the escalation that took place in Al-Muthanna governorate, the security agency arrested one of the activists (H.K.) in the city center of Samawah. The security forces have conducted several investigations with him for nearly four hours, then, he was released. 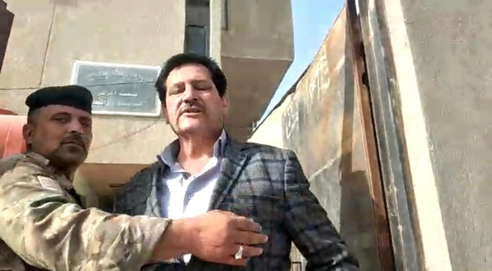 Picture (9) a picture for a demonstrator detained (H.K) by the security forces in the Muthanna governorate. The picture is taken by Muthanna monitoring team.

It is noteworthy that the activist (H.K.) accused bodies affiliated with the governor of Al-Muthanna that they were behind the process of his arrest, as he said: “The investigation that was conducted with him was about his leadership in the demonstrations calling for the dismissal of the exiled governor”