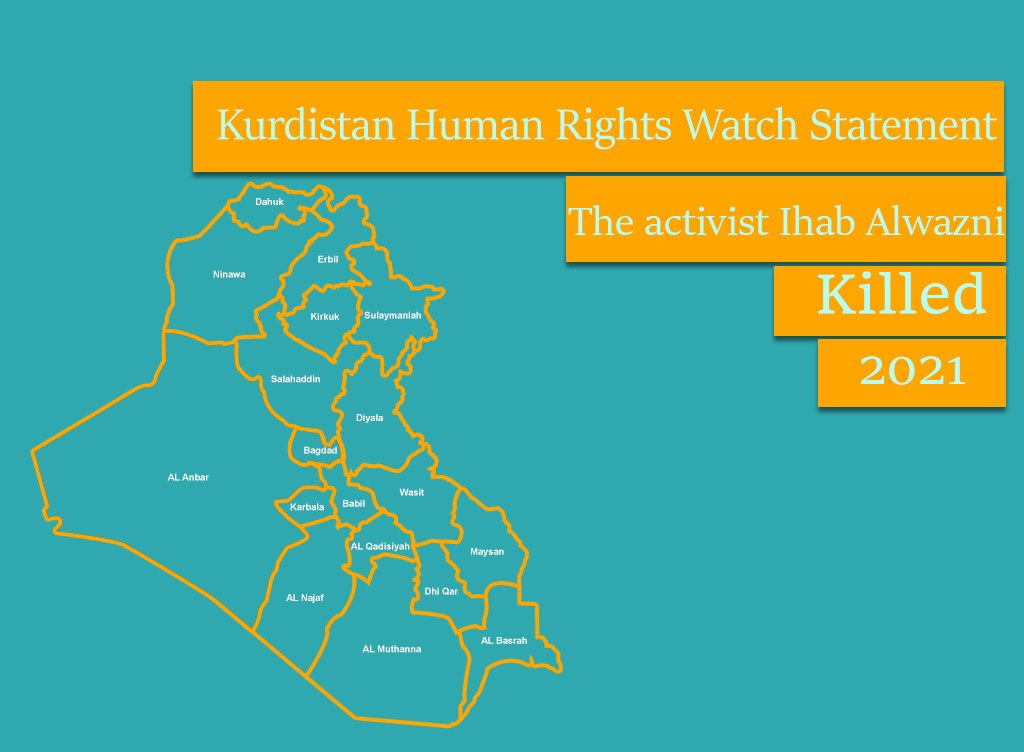 The activist Ihab Alwazni was killed with a silencer pistol with seven shots, four of them into his head that led to be killed immediately. Al-Wazni was killed because he is a civilian activist and head of Karbala coordination of demonstrations.

Unknown parties killed him, and until this moment, the real perpetrators have not been revealed.

Ihab Alwazni did not rule out his death one day after the escalation of 2019 Protests.  It was an important turning point in the political process of the Iraqi people, "the threats of physical liquidation suffered by the demonstrator "Ihab" are many until his life ended several bullets fired from a silencer weapon on May 9, 2021 by two masked men riding a motorcycle near his home in Karbala." (Ahmed Al-Issawi) a close friend of Ihab Alwazni.

The activist and protester Ihab Jawad Alwazni stand out in the February 25, 2011 Tahrir Square demonstrations in the center of Baghdad, which called for the elimination of corruption and accountability for those responsible, then to begin his new journey in the coordination of demonstration, which extends to the demonstrations of 2015. In which he demanded to end the file of pension stipends for senior officials in the country. From Karbala, the civil activist, Ahmed Al-Issawi stated: "Alwazni voted right to demand the rights of the people".

In the last demonstration in which Alwazzani participated, before one week of his death, he gathered with dozens of demonstrators near the hospital project which is established by a Turkish company in Karbala, which was opened by Prime Minister Mustafa Al-Kadhumi about a year ago, but it did not enter the service for unknown reasons. According to Al-Issawi's state: "Alwazni and the demonstrators demanded that the corruption files of this project should be revealed and why it was not brought into service". 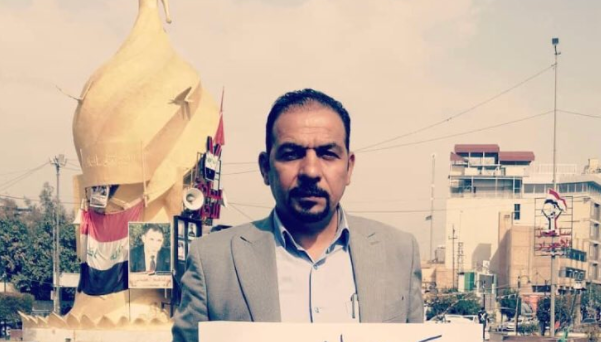 Alwazni was 45 years old, he did not want to marry at all and had a vision forward to his future life, he was telling his friends when was asked this question, he answered that: " he will be killed. So why marry and widow his wife?"

The below video that reflects the night of the assassination incident, when he left the protest square in Karbala at 11:30 p.m. heading to his home and as soon as he arrived to park his car near the house, he was targeted by masked men who are riding a motorcycle with a silencer pistol and this incident is the same incident that targeted the activist "Fahem Al Taie" in December 2019. So, the number of those were targeted in Karbala liquidations reaches three activists since the outbreak of the Movement of Tishreen. Although the location of the targeting of Alwazni took place, the most areas are safe in Karbala because of its close proximity to the vicinity of the holy shrines amid the presence of security follow-ups from checkpoints and cameras.

The killing of "Ihab" sparked outrage a protest in Karbala to expand demonstrations in the streets and alleys of Karbala, which covered most of the city. In which the streets of the city were cut off by burning tires by angry protesters and paralyzed the movement in most areas of the province until the protest arrived on the second night, and the protesters gathered in front of the Iranian consulate and set fire to the places of external protection of the building until the protesters were dispersed by government riot forces.

The Independent High Commission for Human Rights in Iraq has directly criticized the security forces for their weakness in protecting the activists. Saying that this matter caused some of them to leave out of Iraq and others became prey to incidents as they described them, and indicated that the assassination of Alwazni is a continuation of the series of assassinations that affected the free speech owners.

This incident sparked major reactions at the political and international level, as the US embassy in Iraq has prepared the incident as a follow-up to the violence and a way to muzzle mouths, and that the United States is standing with those seeking a peaceful and prosperous Iraq, British Ambassador to Iraq Stephen Hawke, for his part, pointed out the need to hold the perpetrators accountable and protect Iraqis as the elections approach and that the increase in killings as a result of "impunity."

What is important to notice about this incident is that the denunciations were issued by leaders of political parties ruling in Iraq, where the head of the National Wisdom Movement Ammar al-Hakim said that "some activists and media professionals are exposed to cases of narrowing from unknown parties put the government and its security services in front of the responsibility of the active follow-up to this file and the need to reveal the parties behind these crimes,". While the leader of the Sadrist Movement, Muqtada al-Sadr, described in his tweet the incidents of assassinations in the manner of cowards or undermining the security of the country, and that the forces of evil, according to his description, are colluding with the approaching democratic process, referring to October 2021 elections to be held.

The legislative and civil parties and movements in Iraq announced their suspension of dealing with the current political system and boycotting it, and the most prominent of which were the National House, the Iraqi Union for Labor and Rights, the Nazil Movement that took my right to democracy, the People's Party - Faiq Sheikh Ali, the Communist Party, the Iraqi Civil Front - Shurooq Al-Abaiji and the Banna Iraq. The National Home Party, one of the most prominent political movements in October that was newly formed, announced in a statement that it would pursue new methods and different mechanisms to restore public pressure in legal and legitimate ways. And called the United Nations Mission in Iraq to take responsibility for what is happening and not to follow the method of data and numbers.

The well-known politician, Faik Sheikh Ali, is clearly announced his withdrawal from the upcoming parliamentary elections and preparations for what he called the completion of the revolutionary march against Iran and its militias.

Prime Minister Mustafa Al-Kadhumi directed the Minister of Interior to investigate the death of Alwazni's. However, this government directive faced widespread criticism from dozens of demonstrators, as they see that the investigative committees formed by the current and previous government are merely ink on paper without tangible results. The killers of the 800 demonstrators have not been revealed since October 2019.

On Sunday of May 9 2021, during the regular session of Al Kadhumi for the Council of Ministers, he affirmed that "The killers of the activist Alwazni are involved in the crime, and the most deluded person who thinks that they will escape from the grip of justice, we will pursue the killers and exact revenge from every criminal who has tampered with public security."

He added, "The criminals bankrupted their attempts to create chaos and tended to target unarmed activists, but the law will hold them accountable just as others have fallen in the grip of justice before." 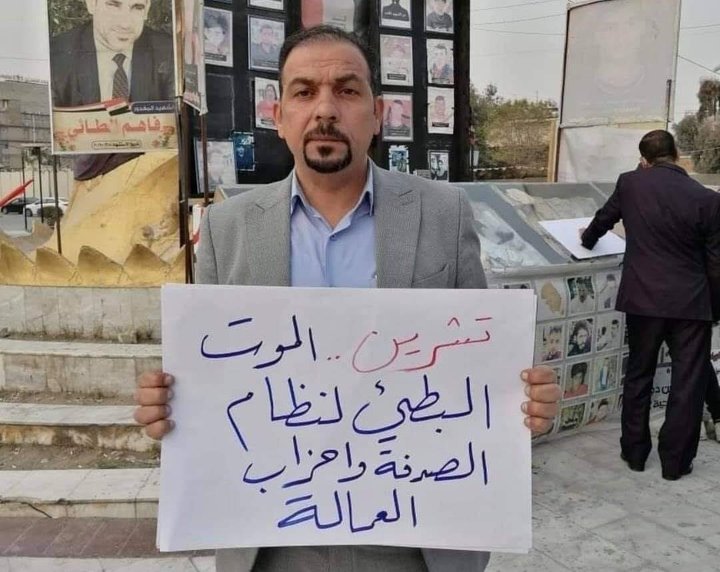 Muhammad Yasser the civil activist reads the assassination incident as an attempt to create chaos in Iraq. There are those who do not like the stability of the country, as well as working to silence the voices calling for the rights of usurpation, as he says, and that these incidents will be repeated, accused of government complicity in such incidents as not all deaths have been revealed. Protesters since October 2019.

The protester Hassan Al-Iraqi describes the Tishreen (October) protesters as being martyrdom projects in order to fulfill the demands that the demonstration squares called for. And the assassination of al-Wazzani is a cycle to complete the series ending the Tishreen (October) Movement file. But it was on the contrary, as the demonstration squares were re-ignited in the coming days the reaction of the protesters will appear in all Iraqi provinces.

Regarding this, Alwazani says: "A victory for the blood of the innocent martyrs who were assassinated by the power of authority and criminal militias' #Boycott, and we will not be false witnesses to the play of your meager elections that you hope for." 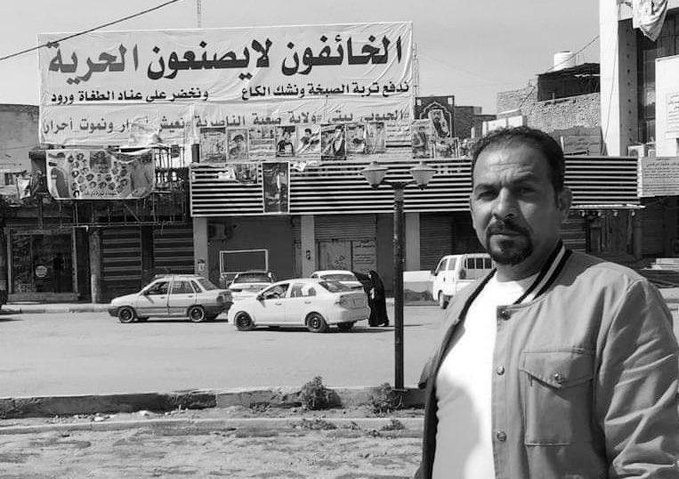 Video of a bold speech by the activist Ihab Al-Wazni, before his assassination 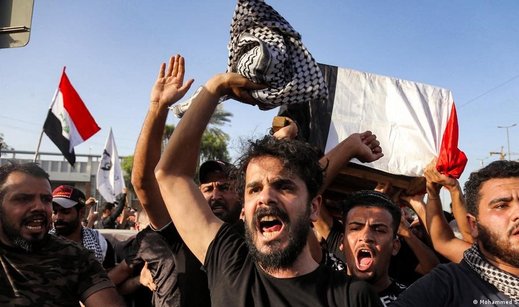 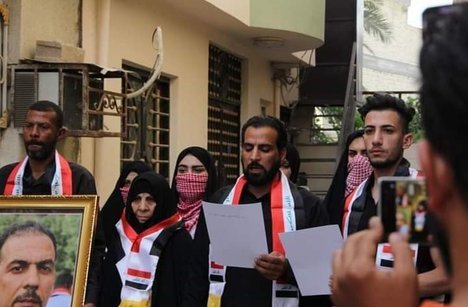 The protesters ’main demands lie in revealing the killers of Ihab al-Wazni and those of Fahim al-Ta’i, overthrowing the regime, and removing the governor, police chief, and operations commander.

Although the demonstrators did not obtain any official approval, they nevertheless went out to protest the killing of "Ihab Al-Wazni," the head of the Karbala demonstrations coordination. With the presence of the security forces responsible for protecting the area, the army is near an educational area in the governorate.

And she promised the demonstrators to continue the demonstrations and to complete the mission of "Ihab Al-Wazni" to end the complete overthrow of the government.