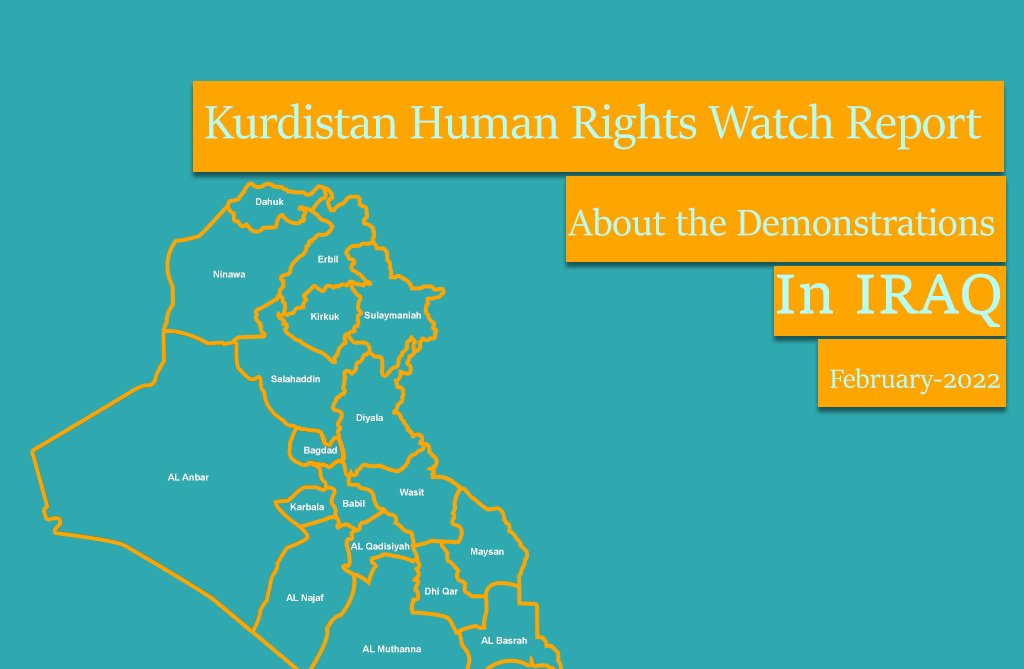 Various groups call for the release of salaries, and others denounce raising the economic level and providing better government services.

The economic, security, and political crises prompted the citizens to demonstrate due to the political and security instability that the country has been facing for several years. In addition, Iraq is facing a deteriorating economic situation due to the decline in oil prices, which is the primary
resource for the country's budget; this has led to a delay in paying the salaries of some government employees. Therefore, several demonstrations were launched in some governorates of Iraq in Dhi Qar and Qadisiyah, in addition to the governorates of Kurdistan, for the peaceful movement of
their movement and raising their demands related to the political system and the government, which aims to form a new method of government and provide job opportunities and a decent life for all individuals in a fair manner. In addition to improving the lives of citizens and preserving the dignity of the Iraqi human being.

On February 23, a vigil was organized for beneficiaries of the social welfare network, whose salaries were cut in the city of Diwaniyah, in front of the social welfare building in Al-Qadisiyah governorate. Dozens of protesters whose salaries were withheld three months ago came out and
demanded the competent authorities in the Ministry of Labor and Social Affairs to release their cut salaries. This was confirmed by one of the beneficiaries: “We are here to demonstrate and protest against our salaries from the care. We own the old models of 1990,1995 vehicles. In 2019
our salaries were cut and returned. That is why they confirmed that the old vehicles have nothing to do with them. On January 1, 2022, We were surprised by the suspension of the salary because we own vehicles, knowing that the financial situation is deplorable. Therefore, we ask you to
convey our voice to the competent authorities and consider our case."

The demonstration included a large number of affected people. At the same time, there was a strong presence of the media, journalists, and activists, where the demonstrators raised banners, calling on the competent authorities to release their salaries.

After these appeals, They formed a delegation from the demonstrators to enter the Social Welfare Department. The Director received them, and a lengthy talk took place, and their demands were listened to. The Director stressed that he is striving with everything he can do to return their salaries and financial dues through administrative and legal committees and even social researchers. The Director assured them that he would provide them with all the help and stand by them. Furthermore, we should not forget the role of the media, which was present in this stand and covering all events, including the Eastern channels and the Iraq satellite channel. The demonstration lasted for more than two hours, and there was an active role for the security forces to protect this gathering. 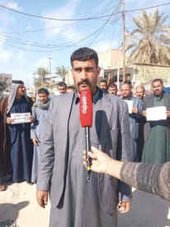 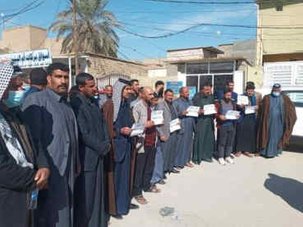 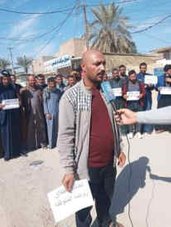 On February 22, hundreds of graduates of oil colleges and institutes protested in front of the Oil Company Dhi Qar east of Nasiriyah near the correctional facility for light sentences. The site is about 2,000 meters away from the city center, and they closed the company and prevented employees from entering it, an escalatory step to pressure the government to provide them with jobs, employees including the Director and officials of the company did not react to what the demonstrators did to close the company, and they returned to their homes to prevent bloodshed.

One of the protesters (Ahmed Hisham) confirmed to our monitoring team, "that their sit-in, which has entered its sixth month, continues and they closed the company until their demands as graduates are implemented." This sit-in is an extension of other repeated sit-ins in front of the same company since September 1 to demand job opportunities without any response from the government. He also added, "Their main and most important demand is to find job opportunities.They suffer from unemployment and the lack of available job opportunities since graduation. The
former governor of Dhi Qar, Dr. Ahmed Al-Khafaji, promised to address the government in Baghdad, but to no avail. As for the current government, it has no position towards us except to address us. In a negotiating way to open the company, the negotiations between the government and us did not succeed." Because the government failed to respond to the protesters' demands until this time, the protesters closed the door of the Dhi Qar Oil Company again and stopped working entirely on Wednesday morning, February 23, and the closure continued. 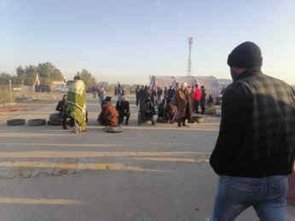 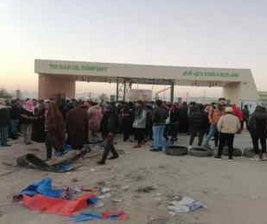 Hundreds of graduates of oil colleges and institutes protested in front of the Dhi Qar Oil Company, east of Nasiriyah, near the correctional facility
for light sentences

On February 17, 2022, dozens of taxi and bus drivers gathered in the Baghdad garage in Sulaymaniyah to protest against the local government in Sulaymaniyah issuing a decision to move the garage from the exhibition at the entrance to the city of Sulaymaniyah to the Taslujah area.
One of the protesters said in a press conference attended by the media, "The decision cannot be implemented on the ground because the new location of the garage is very far from the center of the city of Sulaymaniyah, and people cannot afford additional fees to reach the garage, and they
are unanimously and on behalf of other drivers against the decision and reject it and demand officials in the Ministry of Transport and the Transport Union to rescind their decision Otherwise, they will resort to a sit-in if their demands are not met."

The protesters added that this decision is unfair to them and that it is in the interest of some officials who are interested in the new site of the garage. It must be mentioned that no official government came to the gathering site to respond to the demonstrators' demands, and what is striking is the presence of a large number of media outlets such as Rudaw channels. NRT, Sepideh, Payam, and KNN) and some active pages on social networking sites, the rally site, and covered them. The rally was not peaceful from beginning to end, as the demonstrators ran into the technicians of the specialized company to connect the smart gauges. However, the rally did not cause any significant injuries in the outcome, neither by the demonstrators nor by the technicians responsible for the transportation process. 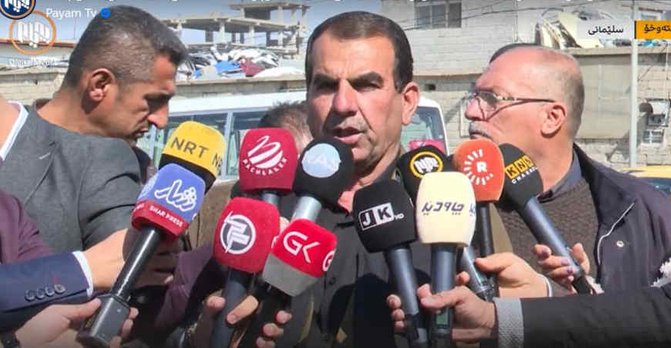 On February 16, 2022, a group of workers and owners of commercial offices at 7 a.m in the vegetable area in Erbil, without prior official permission, cut off the Erbil-Mosul public road with stones, burned tires, and carrying carts due to the measures of Erbil Governorate and the closing of part of the area by a person (investor) The vegetable garden square (Watermelon Garage) and the attempt to move it to the site designated for it by the investor in the private sector, who closed the square and prevented workers from entering it despite the existence of an agreement between the office owners and the Ministry of Commerce until the date of 2038.

The rally organizers appealed to the governor of Erbil to intervene and solve this recurring crisis more than once. Moreover, the owners of commercial offices and workers stressed their demand to open the square and not to transfer them to the civil squares, because the aim is to increase and escalate prices there, and that this site represents the source of their income and by closing it, more than five thousand people will be left unemployed. It is worth mentioning that many security forces

were present in the area and then cordoned off the place, which led to clashes between the two sides. Finally, the crowd broke up, and the road was opened for pedestrians at nine in the morning.
What is striking is the presence of local media outlets, including Payam TV and Speda TV, to cover the event. Nevertheless, unfortunately, there were no government or security officials to listen to the demonstrators' demands.
It must be said that the rally was not peaceful, as the main road between Erbil and the protesters cut off Mosul, this led to friction between the police, security forces, and the demonstrators, and there were no casualties on either side.

A group of workers and owners of commercial offices gather at seven in the morning in the fruit & vegetable distribution center in Erbil.

• A vigil for beneficiaries of the social welfare network due to cutting off their salaries in the city of Al-Diwaniyah in front of the social welfare      building in Al-Qadisiyah governorate.
• Due to unemployment and lack of job opportunities, hundreds of graduates of oil colleges and institutes protested in front of the Oil Company      Dhi Qar east of Nasiriyah near the correctional facility of light sentences; the site is about 2,000 meters away from the city center, and they            closed the company and prevented the entry of employees, in an escalatory step to pressure the government to provide them with jobs
• Protests expressed their resentment against the decision of the local government in Sulaimaniyah to move the garage from the exhibition area at     the entrance to Sulaimaniyah city to the Tasluja area
• Protests by a group of workers and owners of commercial offices at 7:00 a.m. in the fruit and vegetable distribution center in Erbil due to the measures of Erbil governorate and the closure of their main square inside the area.

The security authorities deal with gatherings