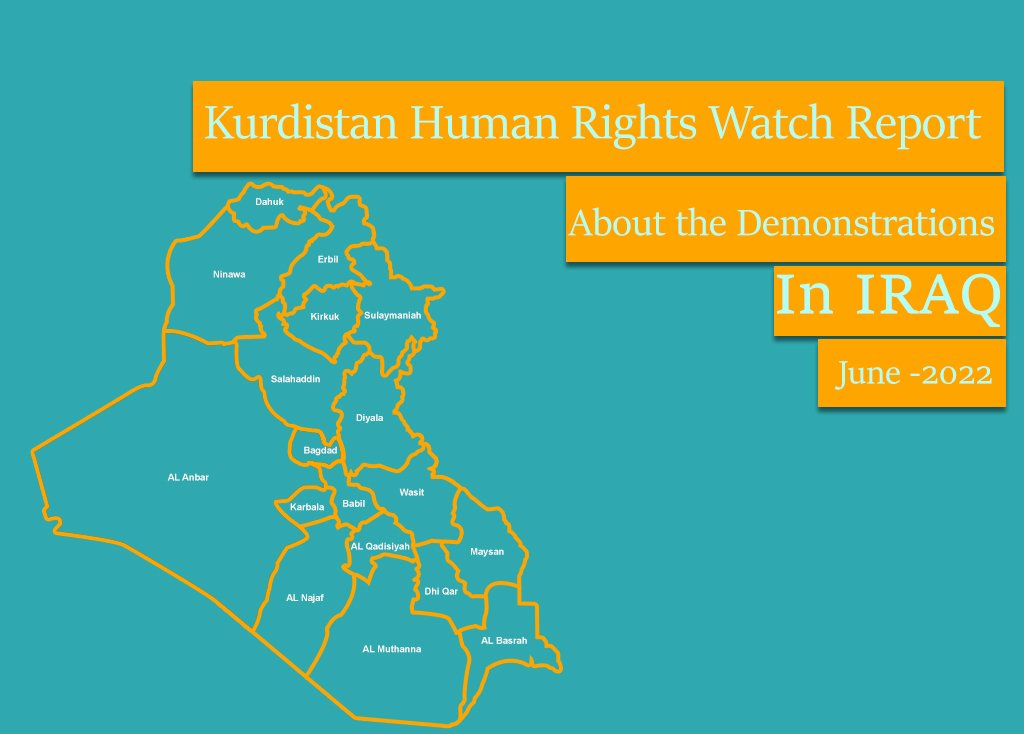 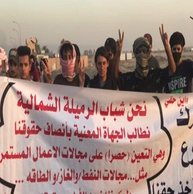 The summer heat, the deterioration of services, and unemployment sparked demonstrations again in various provinces of Iraq.

Peaceful assembly or peaceful demonstrations is one of the fundamental human rights in Iraq due to its ratification of the Charter of the Universal Declaration of human rights, which indicated in Article 19 that everyone has the right to enjoy the freedom of opinion and expression peacefully, and this is approved by Article 38 of the Permanent Constitution of Iraq. However, the deterioration of services related to the provision of electricity, nominally in the summer, with the continuing pressures of living as a result of unemployment, which has become noticeable, especially among young people, led citizens in various provinces of Iraq to go out again in demonstrations demanding the government feasible solutions to these crises. This report will review the demonstrations monitored by the monitoring team during the second half of June 2022 in several Iraqi provinces.

A few days had not passed since the beginning of the summer season, when the electricity problem appeared again in Iraq, which led the citizens, at the invitation of the village elders of Bernon (a village name) , to go out in demonstrations demanding the government find a solution to this problem, which is almost eternal for Iraqis. The village residents of Bernon, which belongs to the district of the city of Hilla, went out in a peaceful rally demanding the government to improve and provide electricity to all the people of the village. The residents of this village suffer

from the lack of electricity available to them and not providing them with the necessary hours of electricity, as electric power is available for only one hour during the day and sometimes does not exceed half an hour. The continuous power cut of electricity has also damaged many homes' electrical appliances. Accordingly, the people of the village, in coordination with the village's notables and youth, organized a demonstration in which they cut off the turn of Bab al-Hussein in front of the Babel electricity distribution Directorate and burned tires in front of the Directorate as a kind of escalation and forcing the Directorate to respond to their demands in providing electric energy.

The electricity problem is almost eternal in Iraq, and despite the considerable money spent on this sector, the electricity crisis is still ongoing. 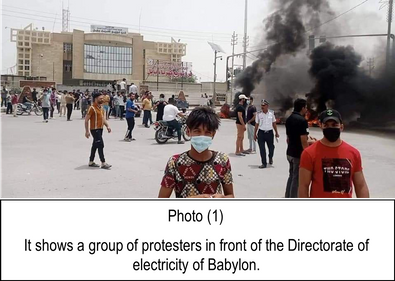 The lack of employment opportunities prompted young people in the Basra governorate to organize demonstrations and sit-ins demanding the provision of employment opportunities. Basra governorate, specifically in the northern Rumaila region, witnessed on Sunday morning ( 19-6-2022 ) demonstrations in front of the Basra Oil and gas company building in northern Rumaila, west of Basra city. Rumaila is one of the most important oil fields. Demonstrations organized by a group of unemployed graduates demanding their rights to provide job opportunities in one of the oil companies, gas companies, or Basra electricity company because the people of the region are the first to employ in this area because of the proximity of their homes to these companies, in addition to being young graduates and certificate holders. According to the demonstrators, they had previously submitted their official papers through the employment office to find job opportunities. Therefore, the opportunity is now available to hire them, so there is no justification for the concerned authorities not to hire them. 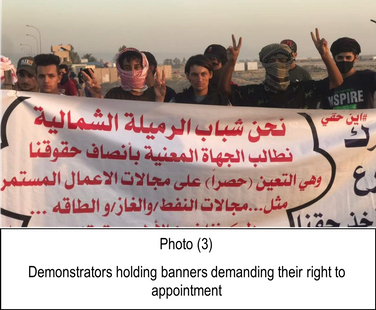 slogans and chants #where is my right, we will not leave the street until we take our right# these phrases are written in the signs as shown in the attached photos.

One of the demonstrators, Ahmed Al-Shammari, pointed out that we, the youth of Northern Rumaila, are demanding that the concerned authorities equalize our rights, which is to appoint exclusively on ongoing business areas such as oil, gas and electric power.

The fundamental problem in Iraq is the continued influx of university graduates into the labor market as job opportunities shrink, which has led to a noticeable increase in the unemployment rate in Iraq in general.

Security forces were deployed to protect the demonstration. However, in the last hours of the protest, the security forces attempted to scatter the groups of protesters without resorting to force.

Dozens of protesters went out in Sayed Dakhil district in Dhi Qar governorate, where the demonstrators gathered on the main road linking four districts of the governorate and cut off the road with burning tires, demanding the dismissal of the governor due to his failure to provide the necessary services to the town. This is what Ahmed Al-Sahlani, one of the demonstrators, indicated, "The district of Sayed Dakhil has been neglected for many years.   We suffer from water scarcity, lack of electricity, and poor services, so we went out today demanding the District Commissioner's dismissal; this is a significant demand for us, and we will continue to demonstrate until our demands are met." 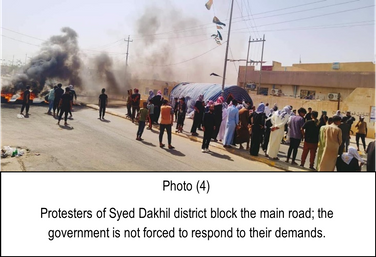 Finding job opportunities can be considered one of the significant problems in Iraq, as it is related to the livelihoods of citizens and a source of income for them.

Mr. Mohammed Jamil Al - Mayahi, regarding the job grades that were approved within the emergency support law by the House of Representatives, the number of thousand job grades, which is the governorate's quota, where the governor indicated that the selection would be by filling out the electronic form and individuals will be selected by ballot. However, this statement generated the opposite reaction among the citizens, as the issue of voting is rejected as unfair, especially for the competent. 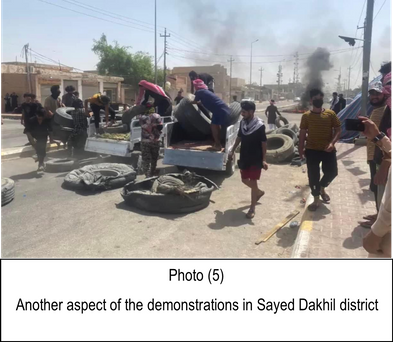 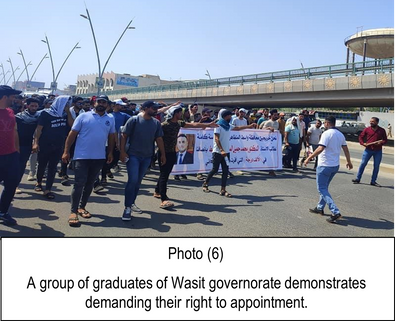 The demonstration started by raising banners: # We are graduates of Wasit governorate. The demonstrators have been demanding for a whole year that Professor Dr. Mohammed Jamil Al-Mayahi do us justice in the thousand degrees approved in the food security law# after demanding that they rely on the lists of names of graduates and lecturers that were prepared by the demonstrators and include all their names in this list as they are entitled to appointment from others according to their claim. The march started from the door of the Directorate of Education building

towards Naseej Street, then entered the governorate Street, passing through the governorate office building and reaching the main door of the Wasit governorate police headquarters, which contains the alternative headquarters of the governor of Wasit, raising banners supporting their demands. In general, all the gatherings held by graduates and lecturers since the beginning of this month have been peaceful, and the demonstrators or the security authorities have seen no signs of violence. However, some restrictions were imposed regarding the demonstration route, as the demonstrators had no freedom of movement. The media and satellite channels covered the events and monitored the rally, as activists circulated widely on social networking sites with a phrase written in the vernacular dialect # Abbas, We only return the decade Wiyana #. Despite the peaceful demonstration, the monitoring team recorded verbal altercations regarding including demonstrators only by appointment, expressing some of their anger towards this issue. There has been no government response to the protesters ' demands.

* Failure to provide electricity to citizens

* Lack of job opportunities for graduates.

Notes on the security agencies ' handling of gatherings: