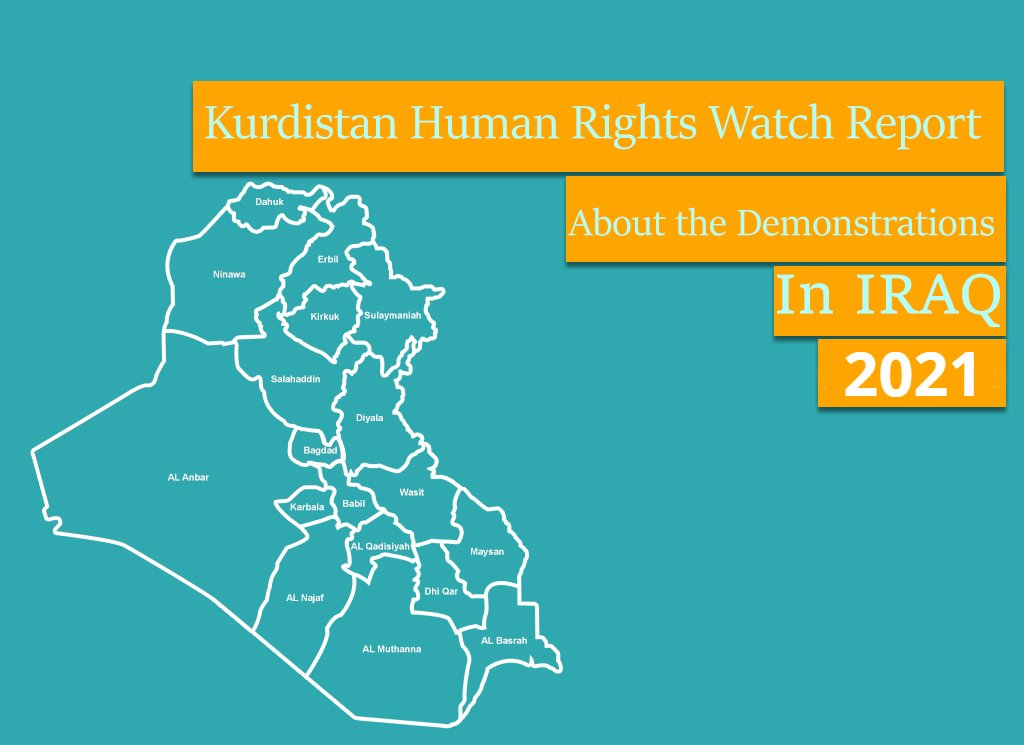 Iraq demonstrations: calls for accountability for those responsible for the
"assassinations"

and promises that have not been fulfilled

Several regions in Iraq, especially Baghdad and the southern cities, are witnessing
widespread demonstrations demanding those responsible for the assassination of
activists and media professionals to be held accountable and denouncing the state's
failure to protect them and investigating the acts of violence against demonstrators
and critics of party policies by unidentified armed groups.
The government announced its commitment to investigate violations and abuses
committed against the demonstrators, but the impunity for the perpetrators continues
to be a source of concern and anger. In addition, the state is witnessing a significant
deterioration in terms of human rights, especially with regard to freedom of
expression and peaceful gathering accompanied by corruption and decline of
economic conditions.

Demonstrations re-erupted in Basra with slogans that may be new in Iraq, after three young men, Hisham Muhammad, Ali Mubarak Fahd Al-Shamri and Ali Karim, were killed under torture in the Basra Crimes Directorate. As well as the demands to free city from the grip of the influential in the Iraqi state, in addition to improving the city’s conditions and extricating it from its miserable reality and demanding the payment of daily wage salaries and contract, their inclusion in the state’s general budget, opening the door for employment and services and providing job opportunities for the unemployed. Groups of demonstrators came out demanding political reform and social demands and respecting the freedom and human rights guaranteed by the constitution. The demonstrations varied between peaceful and non -peaceful.

On 7/25/2021, the 35-year-old Hisham Muhammad was arrested due to a verbal altercation, as he was returning from Baghdad. He was arrested in the entry c heck point of Basra by setting up an ambush by the anti-crime forces after he was released by the judge, who confirmed that he was not the person concerned. The wanted man was tortured by the investigators. His cousins received him while he was unconscious, and he was subjected to beatings and torture, according to his relatives, and he passed away on the way to hospital.” The Police Directorate of Basra said (The deceased was wanted by the security authorities for a murder not for having identical names with another suspect as his relatives claim.)

On 7/30/2021, young Ali Mubarak Fahd Al-Shammari was arrested in Al-Bara’iyah area in the center of Basra / Al-Sadr Teaching Hospital where the director of Al- Baradi’yah Police Station stated that (on July 24, 2021, a call was received to Al- Baradi’yah Police Station to go to the Teaching Hospital, as there are two accused  who were arrested by the Hospital Protection Unit for possessing a weapon. The suspects were received by Al-Baradi’yah Police Station, and one of them was in poor health condition, and before reaching the police station, his health condition worsened, so he was returned to the hospital, where he passed away. The statement of the other accused was recorded and he admitted that the deceased had taken a large amount of drugs for fear of being seized by the police. "His father went in search of

him at Al-Baradi'yah police station, where he was told that his son was present and would come out shortly, but he was surprised when they handed him his son, wrapped in a blanket, who had died bearing signs of torture, stabs, punches and a broken jaw."

On the other hand, the family of the young man, Ali Al-Shammari, organized a protest. The father of the arrested demanded that the Minister of Interior, Othman Al-Ghanimi, conduct an investigation into the circumstances of the killing of his son at the Al-Baradi'yah police station in central Basra. The young man's family denounced the "torture" he was subjected to at the hands of the security forces, which led to his death, demanding the security authorities to bring those responsible for his death to justice. His father said that his son had been detained by the police protecting the teaching hospital in central Basra and had been handed over to help because of a verbal altercation, noting that his son had been transferred to the Al-Baradia police station and after three hours he was handed over to them, a dead body with visible signs of physical torture. He explained that the Shammar tribe in Basra respects the law and demands the Minister of Interior to conduct a fair investigation and to hold those involved in the killing of his son accountable and refer them to the judiciary.

Deaths in police stations were not limited to two cases, as the death of a third detainee was announced in the Basra Crime Directorate within two weeks in Basra. On the other hand, the Office of the High Commissioner for Human Rights called on the Governor of Basra, Asaad Al-Eidani, to intervene in the issue of torture inside Al-Baradi'yeh police stations in the province. 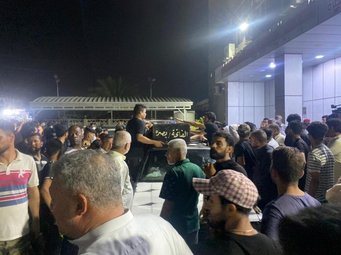 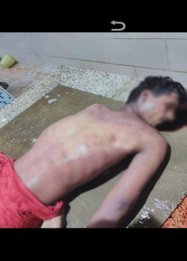 The deceased young man, Muhammad Hisham, after being tortured by the interrogation officers

On 5/8/2021, a number of employees, having contracts with the Basra Health Department, went on a strike in front of the department’s building to protest the reduction of their salaries, which are not sufficient for living. A number of them said that their salaries, according to the contract they have signed, amounted to 300,000 dinars, but after the arrival of a committee from the Ministry of Health to standardize salaries, it was reduced to 200,000, which is not enough to cover their living requirements. On the other hand, Abbas Al-Tamimi, Director of Basra Health Department, explained that the reduction in salaries is due to lack of budget allocated from the

Ministry of Finance. But some hospitals pay contract employees’ salaries based on certain allocations.

On 10/8/2021, the people of Umm al-Aj in Basra, organized a protest in front of the Directorate of Water of the governorate to protest the interruption of sewage hydration to their homes for more than 8 months. A number of them said that there is a large number of homes, up to 500, suffer from the crisis of interruption of water. For a long time, the demonstrators were clear that they had visited the Water Directorate several times, but there were no solutions. 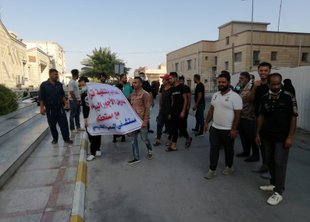 A number of employees contracting with the Basra Health Department stood in front of the department's building in protest against the reduction of their salaries.

On 11/8/2021, hundreds of pensioners demonstrated in front of the Green Zone gate in Karadat Maryam at 9:00 am. on Wednesday, demanding a review of their salaries, which are almost insufficient to meet the requirements of daily life and are not compatible with the high prices, emphasizing that many of them suffer from chronic diseases that consume their monthly salaries, while, during the demonstration, they chanted slogans (Yes, for rights, no, to marginalization, no to the corrupt, Baghdad is free, you are corrupt, get out). The security forces closed the Al-Jumhuriya Bridge due to the start of the demonstration in front of the Green Zone gate from the Karada Mariam side, adjacent to the Ministries of Defense and Planning. 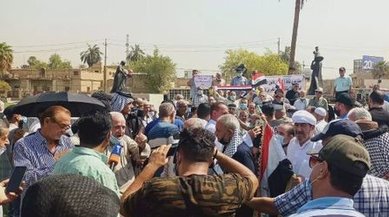 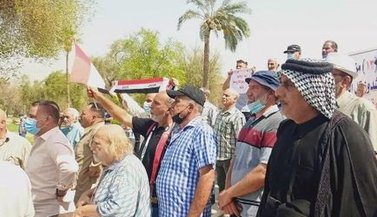 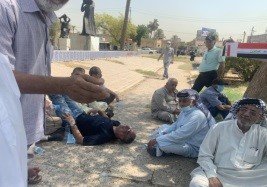 On 8-8-2021, a number of representatives of the organizations of the Union of Minorities, the Iraqi Women’s League, the Citizenship Organization for Human Rights, lawyers, engineers,

workers in the private sector and Yezidi women organized a solidarity stand on Saturday evening in Al-Firdaws Square in the center of the capital, Baghdad, in solidarity with the Yazidi component and the genocide to which the component was subjected to at the hands of ISIS in 2014, in Sinjar. They demanded the reconstruction of their liberated areas after seven years of liberation, the facilitation of the return of the displaced, retribution of the perpetrators and the compensation of the families of the kidnapped men and women. 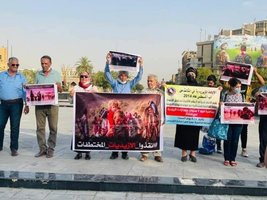 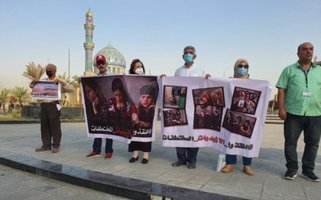 A number of organizations and the Federation of Minorities gathered in Solidarity with the Yazidis and the Genocide that they were subjected to in 2014.

On 8-8-2021, dozens of young demonstrators gathered near the statue of Al-Haboubi Square, the symbol of the October demonstrations in Dhi Qar, demanding the release of their colleagues detained due to the demonstrations and freeing from the malicious they were charged with, including Falah Al-Zaidi and Ihsan Al-Hilali denounced the way in which his house was broken into and his family harassed. The demonstrators headed to the governorate office on Imam Ali Street, peace be upon him, passing through Zaytoun Bridge, where the demonstration continued from eight in the morning until twelve in the afternoon, stating that they would continue to escalate the demonstrations, such as closing main roads and bridges and burning tires. On the evening of the same day, Sunday, the demonstrators returned again after they gathered in Al- Haboubi Square at 4:30 pm, heading to Al-Nasr and Al-Zaytoun Bridges in the center of Nasiriyah city in Dhi Qar governorate. 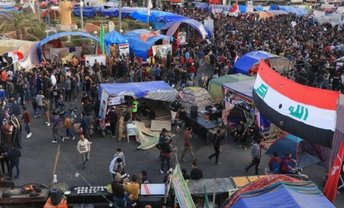 Youth groups vandalize, burn and block the roads and streets in the city

Kurdistan Human Rights Organization ensures that the presence of law enforcement forces is to protect, maintain the law, enhance freedom of peaceful demonstration, protect demonstrators and their freedom to express their opinion peacefully and preserve public and private property and the safety of the society.

The Kurdistan Organization also supports the authorities’ announcement of opening a number of investigations and calls for publishing the results of those investigations, if they were actually conducted, and holding the perpetrators accountable, whether they are police officers, army members or other parties, for killing or injuring demonstrators.

It is worth mentioning that the government’s failure to fulfill the promises it made to the demonstrators is the financial deficit, which led to the launch of multiple demonstrations for

the same purpose. Therefore, several demonstrations were monitored in several governorates, including the capital, Baghdad, and southern governorates, for not implementing the demands of the demonstrators and contract holders and the provision of potable water and water infrastructure, which disturb the balance of trust between the government and the demonstrators. Which sparked a strong reaction that prompted the youth to protest to change the current situation and their goal is to radically change what is happening in Iraqi, which was reflected in complete public anger and resentment against the government policies that spanned over 17 years, which led to security issues, weak economic situation and the loss of confidence in the political process.