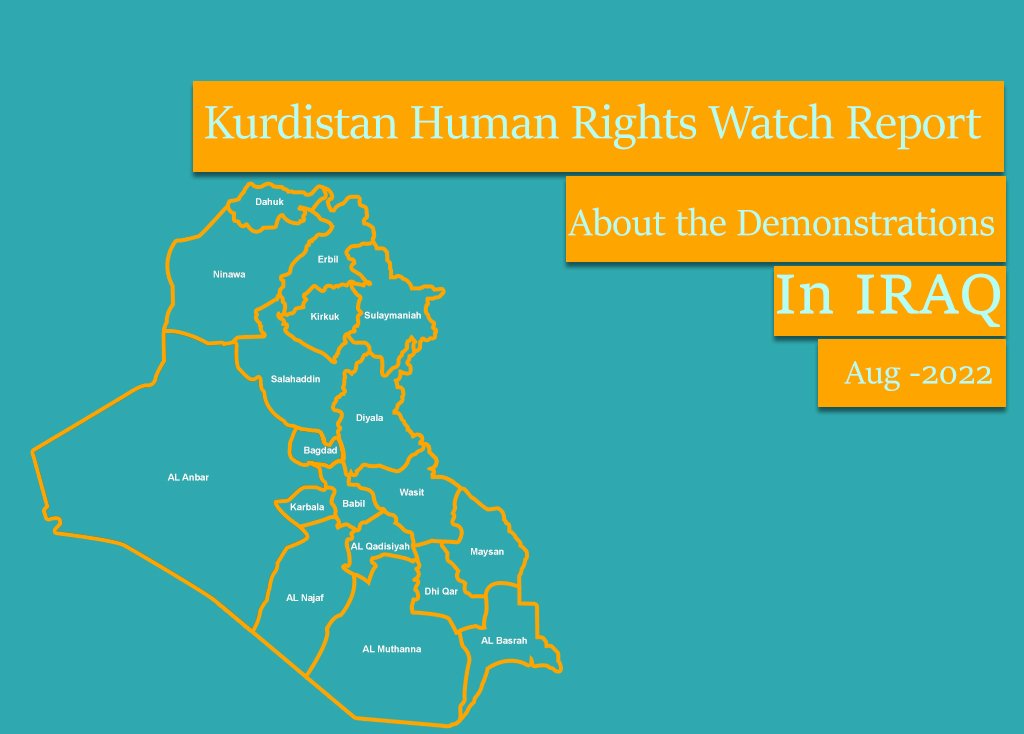 Massive demonstrations were launched in a number of provinces of Iraq by supporters of Muqtada al-Sadr, followed by the announcement of the launch of demonstrations by other political movements, which made the scene in Iraq turn towards confrontations that could drag the country into an ominous civil war. Amid these tensions, voices have been raised calling for calm, return to the dialogue table, arbitration of reason, and return to negotiations between the parties. In the midst of these tensions, Muqtada al-Sadr called on his followers to disperse the demonstrations and end the violence within one hour, ending the inflamed scene in Iraq, so that things gradually return to calm. In this report, the demonstrations monitored by the monitoring team during the second half of August 2022 in a number of Iraqi provinces will be reviewed.

Unusually, Baghdad woke up to the sounds of intermittent clashes and explosions, after a bloody day after Muqtada al-Sadr announced his retirement from political work. In the last hours, Iraq

witnessed successive, unusual security and political developments, as demonstrators stormed many government institutions, and the security forces expelled them by force, which increased the rate of violence, which resulted in 30 deaths and the injury of more than 700 people, including members of the security forces.

Indicators of violence have reached high levels, which can be considered a decline in the chances of democracy in Iraq

tension between the security forces and the demonstrators, which eventually led to the use of live ammunition at the entrances to the heavily guarded area.

It is worth noting that the demonstrations that broke out in Baghdad spread to many other regions and governorates, especially those controlled by supporters of the Sadrist movement. They also took control of the governorate building in the city of Hilla. In addition, they cut off the main roads linking the city of Hilla, the capital, Baghdad, and the rest of the southern provinces. 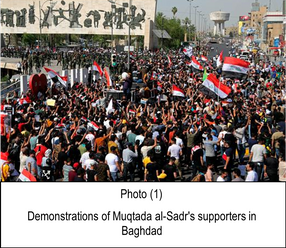 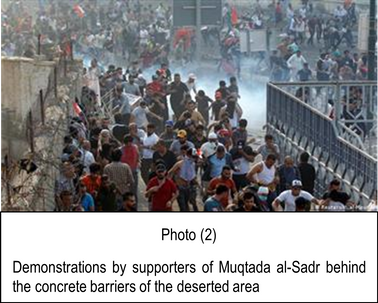 He also issued a decision prohibiting the use of bullets and shooting at demonstrators from any security party and a total commitment to protecting the lives of demonstrators and preserving public and private property. He also directed the opening of an urgent investigation into the events of the Green Zone, calling on the security forces to protect the demonstrators. The government also announced a curfew in the Iraqi governorates, except for the Kurdistan Region, to control the widespread violence. The President of the Republic - 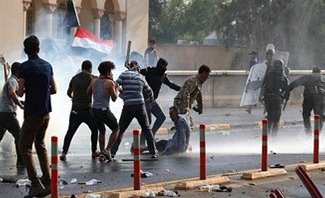 Barham Salih - issued a statement calling on the demonstrators and the security forces to abide by calm, restraint and prevent escalation. Given the circumstances, the country is going through. Furthermore, work to ensure that we do not slip into unknown and dangerous labyrinths in which everyone is a loser. As a warning to citizens, Barham Salih indicated that demonstrating and expressing an opinion is a constitutionally guaranteed right, but this right is simultaneous with adherence to laws and maintaining public security in addition to peaceful demonstrations.

The exciting thing about the demonstrations that erupted is that despite their intensity and violence, their spark was extinguished within less than an hour after the leader of the Sadrist movement - Muqtada al-Sadr - asked his supporters to withdraw and end the demonstrations after he gave them 60 minutes to stop all protests, denouncing their use of violence after confrontations between them and the security forces and individuals. As soon as the demonstrators began withdrawing and the situation calmed, the army announced lifting the curfew and the return of life in Baghdad and other provinces to normal.

A protest vigil was organized by the people of the southern Najaf regions (Al-Manazira, Al-Hera, Al-Mishkhab, Al-Qadisiyah) on Tuesday at six in the evening near the Ghammas control junction (the southern control within the administrative borders of the governorate).

The nature of the demonstrations shows citizens' lack of confidence in the decisions and justifications issued by the government side.

starting from the Haidari district, north of the city, Najaf). Razavi in ​​the city center. This is what sparked the discontent of the people of the southern regions of the city, where hundreds of protesters came out demanding their right that the gate of the governorate entrance from the southern side be the entrance to the Ghammas control according to the administrative borders of the governorate) Moreover, the governor reversed the decision to transfer the gate to the control

of Al-Qaish in the city center. This decision is considered marginalization of the southern areas of the province.

Note that this project is an integrated project that includes the rehabilitation and expansion of streets and sidewalks, landscaping, lighting, and other infrastructure, and this project is an entitlement to the cities south of Najaf. The demonstrations began with a large number of the people of these areas and many media and independent representatives, including Hamid Al-Shiblawy, MP Hadi Al-Salami, and the presence of the security forces carrying slogans denouncing and accusing the government of racial isolation of their region.

This demonstration was met with great solidarity by the governorate representatives with the protesters against this decision and in support of the proposal to erect the South Gate in the Ghammas Junction, where the deputies' signatures were collected. Moreover, a letter was submitted to the governor of Najaf, Majid Al-Waeli. 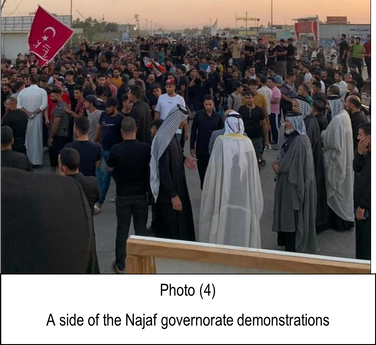 On the governmental side, the governor of Najaf - Majid Al-Waeli - MP - Hamid Al-Shiblawi - and MP - Thanaa Al-Zajrawi - in his library regarding the project of implementing the gates of Najaf and their refusal to decide to implement the southern entrance in the Al-Radawiya area (Al-Qayesh), where the governor stated several reasons for moving the gate to the Al-Radawiya area. Including the presence of privately owned land on the one hand and the other, the presence of a water channel that hinders work in that area, in addition to the fact that the site is within the administrative boundaries of Al-Diwaniyah Governorate.

Despite the reasons clarified by the government, the demonstrators were not convinced by these justifications, so the demonstration continued for the next day when thousands of people from southern Najaf gathered. Many clans showed solidarity with this demonstration, the most important of which are the Al-Fatla clan and the Al-Fayada clan. Al-Jubouri and the (Al Jayash) clan, as well as all the activists of Najaf Governorate.

One of the demonstrators - stated to the monitoring team that a sum of money and a budget had been allocated for this gate within the specific sites for its construction, after which there would be a regular street with lighting for afforestation sidewalks. Al-Qayesh's project will lead to marginalization of the southern regions and deprive us of services for this project.

After our sit-in for several hours and in the presence of a large crowd and protest against this decision, the protesters cut off the primary control, and for the demonstration to continue, a delegation arrived from the governor to request a meeting to address the matter and reach a conclusion. To be satisfactory to both parties, by discussing the matter and working on it in the future. Until the report was written, nothing was issued by the government regarding the gate's transfer of the borders. Accordingly, one of the demonstrators stated that if the governor does not abide by his promises to look into the matter, we will have a final word to announce later.

The role of the media was evident in conveying these events and covering this stand. The most important channels are the Al-Baghdadiah channel and some local news agencies. In addition to covering the entire event on social media. As for security, the security forces committed themselves to their neutrality and non-interference in the demonstration, and their role was limited to organizing the march and ensuring no riots or violence occurred.